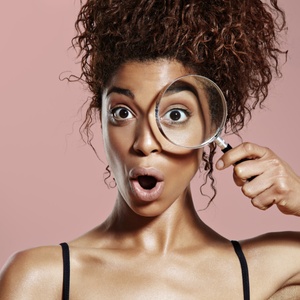 How To Spot Melasma and Other Types of Hyperpigmentation

Pop quiz: When is a freckle no longer just a freckle?

If you answered, “When I want to hide it behind a Band-Aid” or “When it feels like it’s the size of Rhode Island,” you’re not alone.

It's also likely that you have hyperpigmentation. Read on to learn more about this common skin condition, including one of its most prevalent (and perplexing) forms: melasma.

Hyperpigmentation is the overarching term for a variety of skin conditions where one area of skin is darker than those surrounding it.

Skin color is determined by melanin, your body’s natural defense against UV rays. The more melanin you have, the better protected you are. That’s why if you have fair skin, you’re more likely to look like a lobster after an otherwise rad day at the beach: your melanocytes, or cells, don’t crank out as much melanin to protect you as your friends’ melanocytes might to protect them.

When your melanocytes kick into overdrive and produce too much melanin, hyperpigmentation can occur. There are a variety of reasons why your cells might do this.

The chief contributor to hyperpigmentation is sun exposure. When those blinding rays kiss your skin, your melanocytes get spooked. To protect you from a gnarly burn, they produce as much melanin as they can. This often leads to freckles and sunspots, both of which are forms of hyperpigmentation.

(By the way: Age spots are hyperpigmentation, too. Contrary to popular belief, they don’t magically materialize when you join AARP or start eating dinner at 4:00 in the afternoon. Instead, they’re senior citizen sunspots.)

The bottom line is this: If you habitually leave your skin unprotected against harmful UV rays, you can expect hyperpigmentation. At best, this damage presents as a spray of sunspots across your neck. At the very worst, it can lead to skin cancer.

Ever had the Mount St. Helens of blemishes finally disappear only to be replaced by a seemingly permanent dark spot? That’s hyperpigmentation, too. More specifically, it’s post-inflammatory hyperpigmentation, which is a fancy way of saying your complexion is experiencing PTSD and overproducing melanin in response to the hell that mountainous zit just put it through.

While the sun and acne are the two main culprits behind discolored skin, they aren’t the only ones. Heat, for example, can also jumpstart your melanocytes because those well-meaning cells equate heat with injury and, again, are trying to protect you.

Artificial light — including the blue light produced by your smartphone, tablet and computer — can also cause a melanocyte meltdown. If you weren’t already trying to limit your screen time, there’s another reason to put down your phone.

Should You Be Worried About Hyperpigmentation?

In most cases, dark spots are completely harmless — aesthetically unpleasing, maybe, but totally harmless. A prescription skincare regimen is often enough to even out your complexion with time. Effective treatments typically include plenty of vitamin C and other tone-rejuvenating agents, depending on your specific form of hyperpigmentation.

Melasma vs Hyperpigmentation: What’s the Difference?

Melasma is a specific type of hyperpigmentation that affects more than 5 million Americans and results in patches of skin that can appear brown or blue-gray. Discolored areas may be flat or slightly raised like freckles, and they can grow darker or lighter over time. Most melasma is worse in the summer, for example, and grows less severe in the winter.

In most instances, melasma is a chronic disorder. While it’s completely harmless and does not cause physical pain or discomfort, it can cause your confidence to plummet.

Who Gets Melasma and Why?

There are two main things that separate melasma from other forms of hyperpigmentation: its target and its cause.

A Focus on the Face

Melasma almost always appears on the face. Dark patches on the forehead, cheeks, chin, nose or upper lip are common, although they can be found on other parts of the body as well — particularly those that soak up a lot of sun, such as the shoulders.

The Mask of Pregnancy

The other characteristic of melasma that sets it apart from the rest of the hyperpigmentation crowd is the fact that it’s caused, at least in part, by hormones.

That’s right: The call is coming from inside the house.

As such, it affects women far more often than it does men — roughly 90% of melasma cases are women — and it does so primarily during women’s peak reproductive years.

Hold on, ladies; it gets worse. Pregnant women are extra-prone to developing melasma due to elevated levels of estrogen and progesterone. As many as 50% of expectant mothers develop melasma. While darker patches of skin typically fade once the baby is born, melasma’s affinity for moms-to-be has earned it the not-at-all-catchy nickname “the mask of pregnancy.”

Other Causes of Melasma

While hormones are melasma’s main motivation, there are a handful of other causes that may increase your likelihood of developing this skin condition, many of which are behind other forms of hyperpigmentation.

In addition to genetics, melasma can also be traced back to:

Are There Different Types of Melasma?

Much like Hanson or the branches of the United States government, melasma comes in three different types:

How Is Melasma Treated?

Dermatologists treat melasma in much the same way that they do other types of hyperpigmentation, but its success rate is typically much lower. Once again, hormones are to blame: They vary so greatly from person to person that it’s tough to treat melasma using a one-size-fits-all approach. Because of this, the best way to fight melasma is to use a customized approach after consulting an experienced dermatologist. He or she can suggest strategies and solutions that your physician or nurse practitioner may not be able to.

Hydroquinone and Tretinoin: The Batman and Robin of Melasma-Fighting

There are myriad topical medications that your dermatologist may prescribe. Most include a tyrosinase inhibitor of some sort, which will put the kibosh on melanin formation and stop new spots and patches from appearing.

Of these, hydroquinone is usually the most effective. It’s available as a lotion or a cream and applied directly to the affected area(s) every night for up to four months. When combined with tretinoin, it's a potent combo.

Virtually all treatment options require patience. An extra-strength topical agent containing hydroquinone and tretinoin, for example, may take up to six months to produce results.

You can also take care to avoid or diminish some of the previously noted triggers. Consider:

No matter what kind of hyperpigmentation you’re experiencing, the of the best approach to nipping it is good prevention. If you know sun's an issue for your skin, load up on the SPF. If there's more to it, talk to a dermatologist about the ingredients above, all with demonstrated success treating hyperpigmentation and melasma.