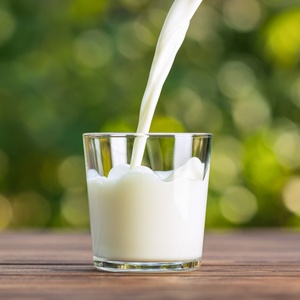 Fact or Fiction: Does Dairy Cause Acne?

It’s an age-old question people have been asking since their middle-school years. Does dairy cause acne? For some people, it might.

All dairy products contain cow's milk. From butter and cheese to yogurt, the one ingredient shared by all of these foods is milk.

Although milk also comes from goats, coconuts, buffalo and of course the now-ubiquitous soy and almonds, it’s dairy that people fear is the source of their acne woes.

In truth, dairy may contribute to acne formation for some. Here’s the story on dairy causing acne.

What The Science Says About Dairy and Acne

Does dairy cause acne? Here's what researchers have found over the years.

One meta-analysis of studies investigating the correlation between dairy and acne found the following results:

Since yogurt and cheese contain reduced amounts of milk proteins, hormones, and other nutrients, researchers speculate that consumption of milk-derived products may not cause enough skin irritation to worsen acne or encourage outbreaks.

One mark against dairy.

Another analysis examined possible associations between acne and dairy intake involving over 78,000 children, teens, and young adults. Researchers included three variables in their investigation: different dairy foods, milk subgroups (skim, low, and whole-fat), and how much dairy was consumed each day.

Results of the analysis found that:

What about teens, dairy, and acne?

A third mark against dairy!

Can adults get acne from diary?

An evaluation of adults between 20 and 60 years old regarding acne prevalence was collected using questionnaires passed out at several healthcare centers. The facial skin of all adults was examined by a dermatologist, who reported diagnosing nearly 62 percent of the adults with some severity of acne. However, only about 37 percent were "aware of their condition."

Results for those researchers assessing these questionnaires found that acne appears to be associated with tobacco smoking, higher calorie intake, seborrhea, and consuming whole and low-fat milk.

Another point for dairy causing acne in adults!

Another study involved patients seeking treatment for various skin problems at a dermatological outpatient clinic. Control subjects had no or mild acne and were visiting the clinic for a consultation. Case subjects had received new diagnoses of moderate to severe acne.

Ding - yet another point against skim milk, which research shows may make acne worse than whole milk!

What’s going on here, and why does milk seem to cause acne?

Most recent peer-reviewed studies indicate that dairy products can irritate and worsen acne outbreaks. However, dermatologists haven't yet determined the precise reasons for the connection.

Researchers think these synthetic hormones could disrupt natural hormone levels in the body that are involved in sebum production, the oil that your skin naturally produces.

Casein and Whey Proteins in Milk

Casein and whey both stimulate growth hormone production in calves to help them develop normally. These same proteins also promote the release of the human hormone IGF-1 when we drink milk. Comparable to insulin, IGF-1 is known to exacerbate acne breakouts by interfering with cell signaling in the endocrine system.

Milk, yogurt, ice cream, and other dairy products contain lactose, a natural sugar derived from combining galactose and glucose. An enzyme called lactase is needed for humans to break down lactose into galactose and glucose before it can be digested properly. People who do not have enough lactase enzymes in their digestive system may present symptoms of lactose intolerance.

Rich in carbohydrates and sugars, dairy products may cause the body to substantially increase insulin production if a person consumes too much of them.

Pediatric dermatologist Dr. Zaenglein of the Penn State Health Milton S. Hershey Medical Center believes that acne is "essentially a complex inflammatory disorder" that makes it difficult to determine if removing or including one factor would "make a huge difference."

A hormone that moderates the activity of growth hormone (GH) in the body, IGF-1 assists GH in supporting the normal development of tissues and bones.

Abnormal IGF-1 levels are implicated in certain rare disorders, such as gigantism, acromegaly, and Laron's Syndrome.

A study investigating associations between acne and IGF-1 found more evidence that diet plays a key role in acne development.

Consuming too many high glycemic foods increases IGF-1 and serum insulin, which has been shown to correlate with acne severity and frequency of outbreaks. Moreover, clinical research suggests that IGF-1 seems to activate cytokine genes involved in upregulating inflammation that increases sebum production and acne lesions.

Also, recent studies have found no indication that higher than normal IGF-1 puts someone at risk for cancer.

Since the late 1970s, milk consumption in the U.S. has declined by almost 50 percent. Over 2500 dairy farms closed down in 2018, 2019, and 2020 due to consumers no longer purchasing what was once the obligatory two or three gallons of milk per week.

However, the consumption of dairy products like yogurt and cheese hasn't declined as much as fluid milk.

Instead of cow's milk, people are drinking milk alternatives--coconut, almond, soy, etc--and reducing their intake of boxed cereals. Instead of sitting down with a bowl of milk and cereal, children and adults are opting for on-the-go foods like protein, granola, and energy bars.

With the rise of diagnoses involving protein allergies, lactose intolerance, and milk enzymes that may be responsible for numerous inflammatory conditions, people just aren't drinking milk as much anymore. But that doesn't mean milk isn't good for you!

Dairy products contain rich amounts of vitamin B12, a nutrient vital to your overall well-being and health. Research shows that consuming enough dairy products to maintain adequate levels of B12 in the body:

What About Lactose Intolerance?

However, the ability to digest lactose decreases as we age.

Symptoms of lactose intolerance are often temporary and easily eliminated by treating whatever is causing a lack of lactase production in the intestines. In fact, the majority of people who self-diagnose themselves with lactose intolerance are actually suffering another gastrointestinal disorder that has nothing to do with dairy or variations of dairy products!

Other Foods Known to Worsen Acne

A 2020 study examined the dietary habits of over 24,000 adults who currently had acne, suffered from acne in the past, or never had acne.  The results indicated a clear correlation between having acne and regular consumption of the following:

Participants in the study who had acne indicated they had a much higher intake of these acne-causing foods than participants who never had acne. In addition, participants experiencing acne outbreaks during the study reported drinking up to five glasses of milk the day prior to taking the survey.

While sorting out the cause of your acne can be daunting, and it can be tempting to pin the blame on one source, acne is often multifactorial. For most people, a quality skincare routine and the right formulations can clear up acne and fight blemishes before they even begin.

At Nava MD, our dermatologists help men and women get custom prescription formulations for acne treatment, including tried-and-true ingredients like tretinoin, niacinamide, and clinamycin, among others.

Get started with your own custom plan today, with ongoing access to your clinician any time and your treatment shipped right to your door. Click here to learn more.